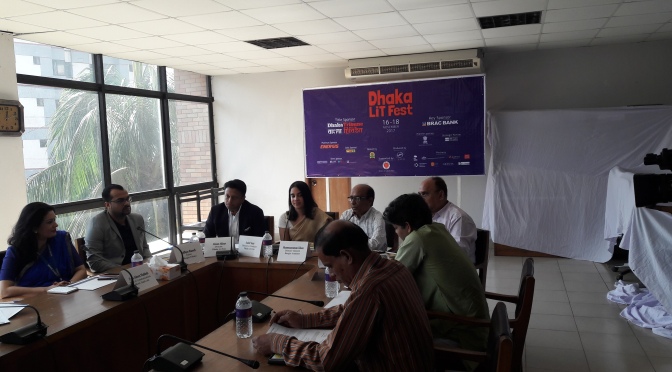 What is the significance of a literary festival?  Celebrated in abundance across many countries, it is becoming a more pronounced and regular feature of the Asian landscape only over the past decade. Whilst Jaipur holds the distinction of hosting the largest and most globally prominent one in the region, other areas in India are striving to replicate its overwhelming success. The importance of these literary arenas has subsequently spread to places like Karachi, Singapore, Bhutan and beyond. However, in Dhaka, this much needed momentum and gap was addressed with the birth of the Dhaka Literature Festival in 2012. In a press conference I attended for the 2017 edition, the directors expressed their desire for the festival to act as a starting point of important regional and global discussions.  In spite of the haze of censorship in the subcontinent via political clout and overt intimidation blurring open dialogue, the DLF stands united as a focal point in addressing these concerns to expand dialogues and minds with exposure to some of literature’s great modern luminaries. This is evident with a prestigious line-up over the years with authors like Nobel Laureate Sir V.S Naipaul, Pulitzer Prize winning Vijay Seshadri, Man Booker Prize winner Deborah Smith, highly acclaimed poet Sudeep Sen and more. This uncompromising ambition carries onto this year with the inclusion of Adonis, the greatest living Arabic poet, Booker Prize winner Ben Okri , Oscar winning Tilda Swinton, Playwright /BAFTA winner Sir David Hare etc among a distinguished host of Bengali writers and poets.

This year will also see the festival announce the winners of the DSC prize for the first time. A truly prestigious award of 25000$ presented for the best South Asian book, comprising of names like Booker winner Aravind Adiga, Anuk Arudpragasam, Anjali Joseph, Karan Mahajan and Stephen Alter making the 5 person shortlist.

What I find wonderful about the festival is the fact that local established and aspiring authors now have the opportunity to engage with and learn from authors of various genres without any distinguishing formalities. This cross pollination of ideas will hopefully lead to increasing the prominence of Bangladeshi writers worldwide. Access to world class literature is imperative towards this dream and the inclusion of literary agents like Kelly Falconer and Granta magazine may help expedite this vision.  This is not a literary festival that panders only to the elite of suburban Bangladeshi society with exorbitant fees;in fact, the festival and all panels remain free of any cost (allowing in the satiation of  any budding intellectual curiosity).  Another topic that was reiterated during the initiating press conference.

Last year I had the opportunity to be invited to the Dhaka Literature Festival  to launch my book and spread word of the review. It holds a special place in my heart because growing up in Dhaka during my formative years I never would have envisioned seeing a Pulitzer prize winning author casually strolling along the lawns of Bangla Academy in conversation with a host of other critically renowned writers. I am certain this simple yet exuberant sense of joy was replicated in the hearts of many attendees, now able to claim such moments not as some vague mirage from an obscure festival review online but to savour the opportunity  and relish it instead as a first-hand experience.

Serendipity is often a neglected muse.  However, this year I am hoping to honour her as I find myself coincidentally in Dhaka during the tenure of the festival alongside Luxembourg Review Columnist Ikhtisad Ahmed and with our global team we plan to cover various aspects of the festival whilst eagerly engaging in the festivities and panels.

The Luxembourg Review at DLF 2017 events:

From page to screen

¬ Shehzar Doja
Founder and Editor-in-Chief of The Luxembourg Review.

Disclaimer: This is an Opinion based essay. The views expressed herein are purely based on the author’s perspective. Agree or Disagree with the sentiments? Have a thought on this very topic? Why not comment below.

There can be little doubt that the ravages of technology are taking their toll on human society and human nature.  Caught up in a maddening rush for material gain resulting from the unchecked advances in science and technology, man has little time or even an inclination to smell the flowers.  The flowers in this case are, of course, the arts.  The demeaning and diminishment of the arts as a measure of our humanity represents a distinct threat to that humanity as it was meant to be.  It is no overstatement to suggest that the very survival of the race may lie in the balance.

Just as the arts define a social culture, the lack of art suggests a lack of culture.  There are myriads of definitions, purposes and forms for art, but for the purpose of this article, I would ask that we consider art not as an act or an object, but as a disciplined creation emanating from the mind which brings balance, meaning and beauty to life.  I would ask that we consider culture as a measure of what it means to be human.  Humanity is the only form of life capable of creating art, creations that go beyond any utility. It is therefore through our art that we are defined as being human.  As human beings, cursed or blessed with a self-awareness that brings us into confrontation with the mystery of our very existence, we find ourselves in a most uncomfortable situation: we are by nature bound to question our why and wherefore.  In my attempts to do so, I have come to the conclusion that it is only through the arts that we are afforded an occasional glimpse into the otherwise incomprehensible.  Attempts to avoid the question with a myriad of other pursuits only adds to the angst and insecurity we seek to overcome, which in reality may prevent us from becoming truly human.  This being the case, one would think the inquisitive human mind would drive us to a veritable obsession with the arts.  But such is not the case.  Those other less than satisfactory pursuits often become our cultural obsession with material gain that has relegated the arts to a periphery of our concerns at best.

The rapid changes in our society, resulting in rapid changes in the priority of our values and following on the equally rapid advances of technology has raised a serious question of just what it means to be human.  The question for debate then becomes whether or not art as such has any real value or purpose. Caught, on the one side, between the ranting of a religious right wing conservative segment that would do away with all administrative funding for the arts, assuming them to be both frivolous and superfluous, and on the other hand the political machinations of a liberal left who would make a travesty of the arts in their efforts to politicize them, is the third side, whose position was best stated on a bumper sticker proudly displayed on a pick-up truck which read, “The arts are not a luxury.  They are a necessity.”  This side faces a continual struggle for survival.

Ironically, the battle being waged is between two of the sides, neither of which has any real understanding of or appreciation for the arts.  The thought of the arts as a product of disciplined and creative minds bringing luster and emotional well-being to our lives is completely foreign to many of those of the religious/conservative right.  In fact, in many respects, the liberality of artistic thinking may represent an actual threat to some of the questionable moral convictions they often hold.  On the other hand, the politically motivated left, all too often, will with malice under the guise of art produce an array of often offensive and manipulative works under the banner of multiculturalism or political correctness whose purpose is not to enlighten but obscure.

Should the extreme right prevail, they could extinguish the light of aesthetic creativity in favor of a rigidity and stagnation. The whole concept of beauty for the sake of beauty could be lost.   Should the extreme left prevail, with its false guise of multiculturalism, the very opposite might be achieved, with the pitting of one enclave against another, as opposed to the universal need for tolerance and a unanimity of purpose to be found in the arts.

There is no greater threat to a pluralistic society than these two warring factions who, in the arrogance of their ignorance would subvert and ultimately destroy any ability we might have to live harmoniously together.  Without a universal understanding of our human condition, continually rediscovered through the arts, we could be splintered into any number of self-serving races, genders, sects, religions, ethnicities or ideologies.  We need the arts, and we need a better understanding of what constitutes art as defined above, an internal appreciation of the balance and beauty in life.  The purpose of art thus defined is not to preach old truths but to open the doors to new truths. The purpose of art is not to indict injustice but to help us understand the causes of injustice.

Have no fear; the arts will survive. Their demise has been predicted over and over again, but we could once more lose countless generations to the ignorance and stagnation that beset the human race during the Dark Ages.  Only our enlightened voices speaking loud and clear can counter the alienation and depression that is certain to follow with a continuation of our present trend toward cultural deprivation.

Hal O’Leary, now at age 90, has been published in 18 different countries. He lives by a quote from his son’s play Wine To Blood, “I don’t know if there is a Utopia, but I am certain that we must act as though there can be.” Hal, a Pushcart nominee, is a recent recipient of an Honorary Doctor of Humane Letters degree from West Liberty University the same institution from which he became a college dropout some 60 years earlier. He currently resides in Wheeling.